The extent to which Gorbachev and the “closely cooperating” partners borrowed from Romanian foreign and security policy initiatives, poorly understood in the West prior to the mid-1980s and increasingly negated thereafter, had been set into stark relief at the July 1989 Political Consultative Committee meeting in Bucharest.[i] The communiqué of that meeting reflected Romania’s success in all the major domains of its independent security policy advocacy within the Warsaw Pact over the previous three decades. For example, all of the Pact members now denounced continuing instances “of interference in the internal affairs of other states, and attempts to destabilize them,” and supported the strengthening of European security through disarmament and through “substantial reduction in armed forces, armaments, and military expenditure.”[ii] All formally acknowledged that “no universal socialist models exist” and that socialism was to be “implemented in each country in accordance with its conditions, traditions, and requirements.”[iii] And Romania’s previously singular insistence on sovereignty and non-interference was now reiterated in the call for respecting “the territorial and political realities which have taken shape, the inviolable nature of existing borders, the sovereignty, and the right of every people to freely determine their own destiny.”[iv]
Instead of pressing for greater confrontation with NATO as had all Soviet leaders (including Gorbachev) prior to 1987, the 1989 communiqué called for the same sort of direct discussions between NATO and the Warsaw Pact with which Romania had threatened to block any renewal of the alliance during 1980-1985. At Bucharest all the Pact members expressed their unanimous support for “transferring relations between the Warsaw Pact and the North Atlantic alliance to an avenue of non-confrontation, setting up a constructive dialogue between them through political and military channels, and turning it into a factor of security and cooperation on the continent.”[v]
Although nearer the end of the communiqué, and despite the fact that Moscow and the other “closely cooperating” partners avoided mention of Romanian reform proposals for real power-sharing within the alliance (consistently pursued since the beginning of the 1960s), Bucharest was able to insert the admonition to “strengthen the Warsaw Pact's political – rather than military – nature and to further improve the cooperation mechanism within it on a democratic basis.”[vi] And, while Moscow sought to prevent any discussion of the Romanian proposal, the leadership in Bucharest managed to express the need for fundamental Pact reform and the desirability of establishing full equality through the rotation of all command posts.
A similar sea change was evident regarding the adoption of Romanian policy approaches to international relations more generally, with the other Pact members now echoing Bucharest’s April 1964 “declaration of independence” and expressing unanimous support for “settling, by peaceful means, regional conflicts in the Middle East, Africa, Asia, and Central America,” while setting negotiation and mediation as the standard of inter-state conflict resolution:

Life has confirmed that the path of negotiations is fruitful and that there is no sensible alternative to it. They will continue to actively promote the political resolution of crisis situations in the world and to further enhance the UN's role in this.[vii]

The Romanian imprint was particularly clear regarding policy in the Middle East, where the communiqué expressed the Warsaw Pact’s support for holding:

… an international conference as soon as possible on the Middle East under the UN aegis, with the participation of all the interested parties, including the PLO, [and] an all-embracing Middle East settlement on the basis of the recognition of the right of the Palestinian people to self determination, to the existence of an independent Palestinian state, just the same as the right to independence, sovereignty, and integrity of all the states of the region, including Israel.[viii]

The Pact members likewise rallied around a “just settlement of the situation” in Afghanistan that would leave it independent and free to determine its “fate without any sort of interference from outside” – again echoing Romanian calls.[ix]
One of the leitmotivs of the communiqué was the greatest possible use of the UN for making and maintaining peace, long-championed by Romania and in line with its calls for an increased independent role of small and medium sized states in international affairs by involving “all countries, irrespective of their size or social structure, in solving world problems.”[x]  Likewise, the Romanian call for a united effort with the “active participation of the United Nations” in addressing the “deepening rift between the developed and developing countries” and “establishing a new international economic order,” also appeared in the communiqué.[xi]
Romanian influence was especially profound in the sphere of defense policy where its long-held positions were now reflected in Moscow’s support for unilateral reductions, withdrawals, and confidence-building measures, and its recognition of a general parity of NATO and the Warsaw Pact strengths. Even more significantly, Soviet and Pact leaders now echoed Romanian calls for jettisoning their offensive strategic posture in favor of defensive structures and strategies as a means of avoiding international tensions, a shift strikingly illustrated at the Pact’s Defense Ministers meetings since 1987.[xii] Bucharest was equally unequivocal on weapons of mass destruction: 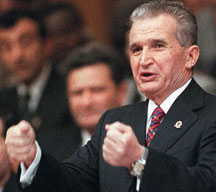 The fundamental issue in international relations is, above all else, after the issue of repudiating the modernization of nuclear weapons, the conclusion of a treaty as soon as possible between the Soviet Union and the United States of America to cut strategic nuclear missiles by half, and then a universal treaty by the year 2000 on the complete elimination of all nuclear weapons, to which all the nuclear powers and also the other states of the world interested in disarmament, peace and life on earth should become party. …
I would like to stress once again that nuclear disarmament and disarmament in general concern not only the Soviet Union and the United States of America, and not only the states possessing nuclear weapons, but all the states of the world. For the consequences from the use of nuclear weapons would be felt by all of humanity. All states in all continents have an interest in the complete elimination of nuclear weapons and must work actively to achieve this.[xiii]

Ceausescu likewise exhorted the participants to “work toward the signing of a treaty on the elimination of chemical weapons in close conjunction with the elimination of all nuclear weapons,” and to use “the Geneva disarmament conference as well as other meetings to eliminate chemical weapons and reduce conventional weapons to the minimal levels necessary for defense.”[xiv] Reiterating the policy his country had pursed for twenty-five years, he underscored that: “Romania resolutely insists that conflicts in the various parts of the world should be settled and problems resolved solely through negotiation, without exception.”[xv]
The unequivocal support for disengagement and disarmament, particularly for more radical reduction and destruction of all nuclear and chemical weapons, and for negotiation as the only legitimate form of conflict resolution, which authorities in Bucharest expressed during the July 7-8 Warsaw Pact summit was most problematic and potentially devastating for the “aggressive encampment” characterizations of Romania now disseminated through Pact-wide active measures. Measures had to be taken.

On July 9, immediately after the concluding ceremonies of the summit and before leaving the Romanian capital, Hungarian officials described the event to reporters as something very different. According to them, the meeting was dominated by Budapest’s clash with Romania over the latter’s alleged abuse of minorities and by Bucharest’s demands for a Warsaw Pact invasion against Hungary, thus marking “the lowest point for relations between the two Warsaw Pact allies and neighbors since both fell under Soviet domination at the end of World War II.”[xvi] However, while Hungarian authorities publicly denounced Romania’s minority policies, they provided information as to Bucharest’s military aggressiveness only as background.
Gyula Horn underscored this “crisis” as the breaking news of the conference to Hungarian journalists before he left Bucharest. “In the political sphere,” he insisted, “we have reached a bottom point,” terminology that analysts described as the “most negative official assessment of relations between Warsaw Pact allies” ever employed.[xvii] Ironically, as Hungarian authorities had anticipated several months before, all of the other Pact members had also rejected Budapest’s extreme demands regarding minority policy.[xviii] The Bulgarian über-ally was particularly sensitive on this point given that it actually was carrying out the sort of forced assimilation policy for which Budapest blamed Bucharest. In 1989 alone, that policy was responsible for the dislocation of over 330,000 ethnic Turks from Bulgaria in what was then the largest dislocation of population since World War II.


As Bulgarian leader Todor Zhivkov confirmed to Gorbachev only two weeks before the July 1989 Bucharest summit, his “country was interested in the expatriation of 200, 300 and even 500 thousand Moslems,” and would in no case “admit that the Moslems are of Turkish nationality.”[xix] Gorbachev did not take issue with Zhivkov’s policy in June nor could he back Budapest in July because he was already on record backing Zhivkov’s claim that criticism of Bulgarian treatment of ethnic Turks was an "imperialistic attack against Socialism.”[xx] Thus, the clash over this issue at the July 1989 PCC meeting, while noisy, was brief.
At his first news conference in Budapest following the Warsaw Pact summit, on July 10, Foreign Minister Gyula Horn also misrepresented Bucharest as fostering nuclear proliferation and confrontation – one hundred and eighty degrees opposite the positions that the Romanian regime had just advocated in Bucharest. The Hungarian Foreign Minister’s timing was propitious for successful propagation of that disinformation line since President George Bush, Sr. was scheduled to visit Budapest shortly thereafter. According to Horn, during the summit unidentified “high-level” Romanian officials “announced that their country was now capable of producing nuclear weapons and would soon make medium-range missiles.”[xxi]
Horn pressed this point in a series of interviews with the international media, in which he described the “aggressive military threats” allegedly emanating from Romania. In the version he related to an Italian journalist several days later, he claimed that the Hungarian delegation had “warned Ceauşescu at the recent Warsaw Pact summit in Bucharest that the threat of such missiles to European security ‘must not be underestimated,’ but that the Romanian leader gave them no reply.”[xxii]
Prime Minister Miklos Németh told an American journalist that the Romanian leader demanded that the Warsaw Pact militarily intervene in his country: